If you are like me, you make local film festival plans last minute, which makes my annual WTF is Latino at LA Film Festival post not so much late as just (still) in time for you to make a few movie selections this weekend and next week.  The festival started last Wednesday, June 1 and runs through Thursday June 9th.  PDF of schedule here.

In full disclosure I am a Programming Consultant for the festival. These aren’t reviews as much as hopefully an insightful guide. My purpose in this series is not only to spotlight Latino writers/directors and monitor representation, but also to challenge notions of WTF is Latino.  It is a U.S. context classification that is vast; a generational and geographic diaspora.  The term Latino is often mistakenly appropriated to international filmmakers/talent from Spanish and Portugese-speaking countries.  Alejandro Gonzales Inñaritu is not Latino or a Person of Color guys.  I’m talking about ‘Merican – Latinos.

The biggest change at the LA Film Festival is that it has moved from DTLA’s L.A. Live Regal Cinemas to the West side in Culver City’s Arclight Cinemas. The festival has scaled down considerably from 2014’s nearly 200 features to this year’s 56 feature-length film lineup. It underwent a programming department shakeup last year, the result of which it achieved an unprecedented shift towards more inclusive representation. The festival also established a strict world premiere requirement outside of a few special screenings and the Buzz section in order to give new films a shot.  For the second year in a row the festival remains leader of the mainstream festival pack with keeping true to its diversity mission.  43% of the films in competition categories are directed by women; and 38% of the films are directed by people of color. 86% of the films in competition are directed by 1st or 2nd time directors.

About the U.S. Latino rep –  there’s 5 US. Latino feature-length writers/directors I can identify which comes out to roughly under 10%. In front of the camera the program includes co-starring/cameo roles from established actors like John Leguizamo, Eva Longoria, Lauren Luna Velez, Elizabeth Rodriguez, Judy Reyes, Emily Rios as well as hot rising talent like Gabriel Chavarria, Yvette Monreal and Victor Almanzar. 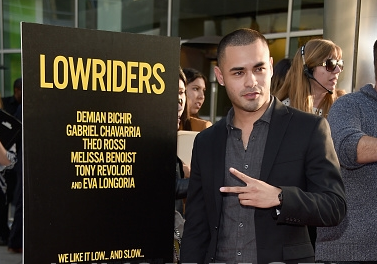 Everyone agrees that the film’s theme made this the perfect LA Film Festival world premiere and while I’ll take full credit in pitching the film to the festival, I certainly cannot take credit for giving it the prestigious Opening Night slot which speaks to Festival Director, Stephanie Allain’s mission of centering underrepresented films as festival headliners. About the film’s pedigree: The film was conceived by Hollywood producer Brian Grazer who grew up fascinated with the lowrider culture. Grazer enlisted Peruvian filmmaker Ricardo de Montreuil to direct, who with his super talented Colombian DP Andres Sanchez, captures the landmark bridges, hills, hotspots and avenues of El Sereno, Echo Park, Elysian Park and Boyle Heights.  But its LA born and bred legendary tattoo artist Mr. Cartoon and photographer Estevan Oriol, listed as executive producers, along with co-writer Elgin James, who lend the film some cred and streak 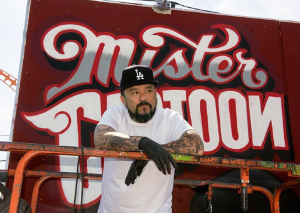 of authenticity into this male-dominated club culture.  In front of the camera is East Los Angeles native Gabriel Chavarria (East Los) who plays Danny Alvarez, the graffiti artist son of a an OG lowrider club member. Cast is rounded out by Italian stallion sweetheart Theo Rossi (Sons of Anarchy) who plays his brother, Guatemalan-American Tony Revolri as a friend, Academy Award nominated Mexican actor Demian Bichir (A Better Life), Eva Longoria and Yvette Monreal. The Grazer/Blumhouse production, which is said to have cost around 5 million, has yet to announce a release date let alone a trailer or social media campaign.

LUPE UNDER THE SUN written and directed by Rodrigo Reyes

A bittersweet tale about a fascinating and flawed man who comes to an unsettling realization about his impermanence.  Set in Merced, California where Mexican-American filmmaker Reyes is from, Lupe Under the Sun is slotted in the World Cinema competition.  I listed this film as one of my top 10 films to watch out for in 2016 so I’m so excited to see it get its first festival premiere. While it makes sense to tag the docu-fiction film under immigrant struggles, don’t get it twisted. Reyes’ sophomore film smartly eschews politics  and portrays a personal and deeply moving character’s existential crisis.

The title is a sly evocation to a 3:10 to Yuma type western duel in that it sets an increasingly tense timer from Marine Nelson Sanchez’s early morning return back home to that night’s arrival of a bus carrying a dangerous antagonist who blames him for the death of his brother and is out for revenge. Dominican-American Victor Almanzar who is a real life Marine, stars and co-wrote the film.  The story is tight and oozes tension from the get as his homecoming is quickly overshadowed by the looming danger which conflicts with his genuine desire to move forward with his girlfriend and protect his sister and niece. Bomb performances by Victor and Elizabeth Rodriguez as well as John Leguizamo who plays a veteran in a wheelchair (damn he is good at drama). About the directors, both cinematographers in their own right, Ben Snyder notably was a Story Consultant for documentary The Wolfpack and did additional cinematography for Nas: Time is Illmatic, while Ari has shot music documentaries like Brothers Hypnotic and the Hip Hop Project. 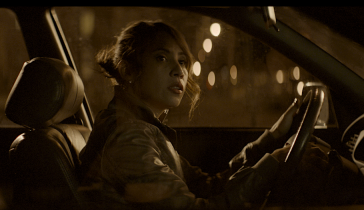 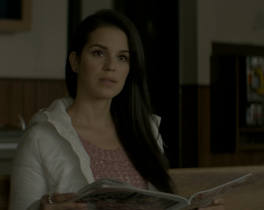 The film had its first world premiere screening Thursday night so if you missed it I urge you to join the campaign to demand an encore screening slot.  I hope it happens. This is a must watch as its an incredible feat of collaborative and guerilla filmmaking.  It is a ridiculously authentic and compelling feature of interweaving slices of Black youth in Brooklyn led by one college-bound 18 year old Caesar Winslow’s pursuit of romance across Brooklyn. 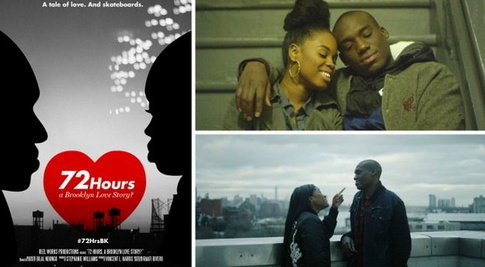 When I asked Rivero how he defines his cultural background, he said Hip Hop. Which is a good reminder how each person identifies with their own distinct cultural upbringing (Okay he’s got a grandfather from Cuba).

The craft and history of Foley for all you Foley junkies. A documentary playing in the LA Muse section.

Making the rounds on the festival circuit since Sundance and SXSW is short film, The Send-Off directed by Ivette Lucas playing in Documentary Shorts program 1.

Emily Rios (From Dusk til Dawn tv, The Bridge, Quinceañera) plays Alia Shawkat’s  punk no nonsense best friend in the film adaptation of Paint it Black written by Janet Finch.  It’s notably quite an impressive and dynamic directorial debut by actor Amber Tamblyn. The film is premiering in the U.S. Competition. 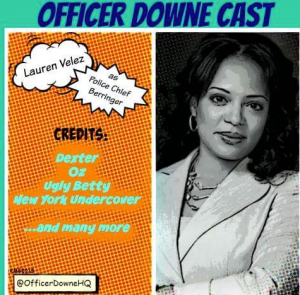 Lauren Luna Velez has a deliciously wicked role as police chief in the ultra-fun action violent cult comic adaptation Officer Downe about an L.A. supercop who is killed in the line of duty but is  resurrected to clean up the streets. The joy ride is directed by M. Shawn Crahan (Slipknot) screening in the NightFall Section.

Judy Reyes (Scrubs) is called on to soothe the anxiety of a young girl’s first period and welcome her into womanhood in comedy Girl Flu written and directed by Dorie Barton, screening in the LA Muse section.

and now MISC: A couple of my recent festival faves and must-see’s if you can catch them at the fest. 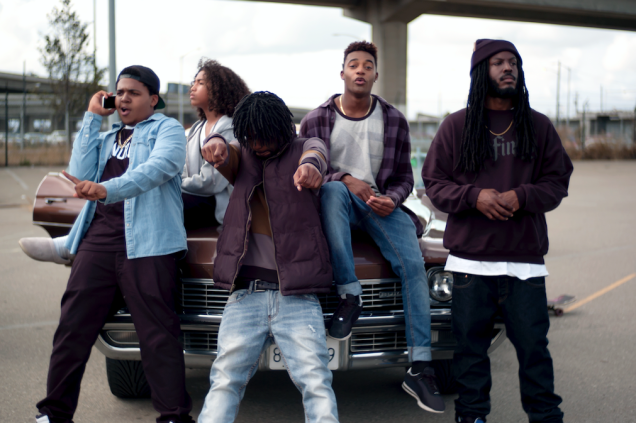 KICKS, the pulsing and striking directorial debut of Justin Tipping is co-written with Joshua Beirne-Golden. Both of whom incidentally wrote an original script for Lowriders at one point and ultimately received co-producer credit. The Oakland set film stars stunner talent Jahking Guillory who decides to go after whats his (the Air Jordans he bought himself which he was jacked for) ultimately sending him on an irrevocable path torwards confronting what it means to be a man in his social construct. The film  premiered at the Tribeca Film Festival. #KicksFilm 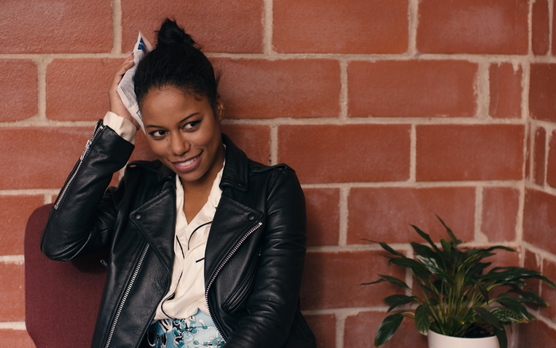 Follow the latest scoop @LAFilmFest, check out their YouTube videos for daily coverage and interviews, and for more info go to website or call box office: 1 866 Film Fest.

Heading to the Westside so stay tuned for more via my twitter handle: @IndieFindsLA