I’m swelling with pride over home girl, Aurora Guerrero, whose years-in-the making, crowd funded, first feature Mosquita y Mari which premiered at this year’s Sundance Film Festival 2012 has been acquired by Wolfe Releasing which means it will become available on Video On Demand and DVD next year!  In the meantime non-profit, filmmaker user-friendly Film Collaborative will be releasing theatrically.  MyM will next screen at San Antonio’s Cinefestival (of which I’m on the advisory board) and will surely have a healthy festival run so follow it on the Facebook page to keep up with future screenings.

Neta (bottom line): Not only does the film boast an authentic and transcendent portrayal of two young Chicanas battling out their coming of age in the vibrant South LA community of Huntington Park (trumping the usual and tired ghetto stereotypes we are spoonfed as ‘hispanic,’ ),  but also the intense butterfly-in-your stomach jubilation and  inevitable heartbreak that it evokes is testament to the passion of the filmmaker’s voice. 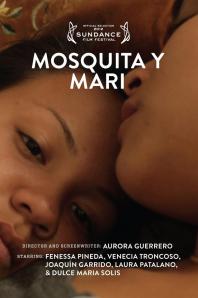 Guerrero was kind enough to answer a few questions exclusively for mi blog so check it:

Me: That Los Angeles Negros song, Murio La Flor, which is featured in your opening is such a moody, gut wrenching love ballad and sets the nostalgic tone so well for the film. Tell us about the rest of the soundtrack, and the music that inspired you during the making of the film.

AG: I probably would have had more songs from my parent’s era if it hadn’t been for costs. Most of those groups, like Los Angeles Negros, were bought out by big American music companies back then because they were so popular among Latinos. Good news for those groups but bad news for the filmmakers who want to use them! Bueno, on the other hand I knew that I also wanted to bring in some new sounds that most people don’t often hear when they watch a Latino themed film. I think for the most part audiences are used to the Spanish bolero, Hip Hop or the hard core Norteño so I wanted to challenge these notions with contemporary music that Latinos are producing that really move away from these stereotypes.  When I heard Carla Morrison for the first time I knew I wanted her music. She felt like that contemporary musician with a melody and voice that really captures what’s painfully good or painfully bad about love. Her music is just as haunting as Los Angeles Negros. I was also inspired by the music scene in Huntington Park. The youth are drawing from familiar sounds from their immigrant upbringing, like Mariachi, Banda, Norteno, and Cumbia and blending them with Reggae, American pop and so forth. The sounds in turn are unique and infectious! The relationship I was able to build with the youth belonging to the local community organization, Communities for a Better Environment led me to discover local SKA bands like La Pobreska, Viernes 13, and Raiz Organica.  They’re singing in Spanish, English and Spanglish and addressing issues in their community through their music. I was excited to bring these sounds to my MyM knowing well that this element would provide it with a strong sense of place and authenticity.  Ska and other genres of music I chose for MyM ultimately reflect who our young people are today – a unique blend of identities that mark their special place in American society. 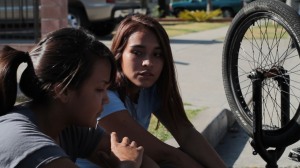 ME: I read you have a strong education and community based roll out strategy with the film. I use to mentor a young ambitious teen myself and it was so incredibly inspiring to meet such young Chicanas so sure of themselves and their goals.  Do you share this impression that this next generation is indeed more assertive,  more academically and politically inclined and goal oriented than ever, and to what do you think owes this shift?

AG: I do think that there is a higher number of more vocal Chicana youth today then maybe in my time though I don’t think 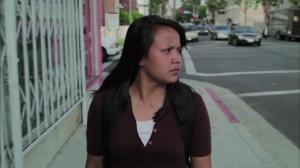 it’s the majority. The incessant violence against poor, women of color and LGBT youth continues to have its negative impact on our young people’s lives. But for those young Chicanitas that are being more conscious I think it’s because they are being exposed to conscious Chicanas at a younger age. I wasn’t exposed to politically conscious women of color until I went to college. Now I think there are more politicized Chicanas going back into their communities either as teachers or community organizers and they are impacting the lives of our young people very early on.

ME: What do you think it is about love and crushes that make us act so crazy time and again? One moment we are in ‘Las Nubes’ as they say and the next we are screaming our hearts out as your film so poignantly captures.

AG: I think love is one of the few emotions that bring us back into our bodies. Most of us are so consumed with material stability that we forget what makes us human. I think love reminds us of our humanity – our capacity to feel deeply for someone. So when love hits us, at whatever age, it always hits us hard, you know, making us all crazy inside. But that love often times does change us in some way – usually for the better I think, or so I hope. 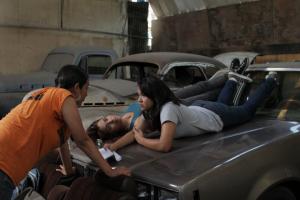 ME: Lastly, what in your opinion do the big studio/corporate companies’ persistent and varying number of appeals and ads to exploit the “Hispanic” market get wrong every time?

Check out the trailer and find out more about the talented cast and crew on the film’s website.

2 thoughts on “Meet Aurora Guerrero, filmmaker of Mosquita Y Mari, and a girl after my own heart”