In honor of the social rights activist who would have been 85 today let’s take a look at not just one but both of the feature films about his life’s work in the pipeline.

One is a narrative being directed by Diego Luna and written by Keir Pearson (Hotel Rwanda), the other, a documentary by Richard Ray Perez, an established film and video documentarian which has been supported by Sundance Institute.  Both stand to give honor to the dogged labor rights organizer and activist in two distinct cinematic approaches.  The documentary which is called Cesar’s Last Fast is entering the last stages of editing and a rough cut is expected by mid-summer. While the narrative, only referred to as Chavez for now, has just begun shooting. 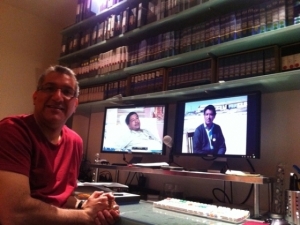 Most  doc critics and enthusiasts would agree that a question worth asking when considering documentary cinema, is finding out the filmmaker’s connection to the subject/story.  That is, why is THIS given filmmaker the best person to tell THIS story. In Cesar’s Last Fast, its fascinating to hear.  Apparently it’s by inheritance that brought Rick Perez to the project.  A woman very close to Chavez collected years and years of documentation and upon her death willed that only one person could take on and carry the project to fruition and that was Rick Perez.  His venerable team includes Molly O’Brien, emmy award winning producer.  What’s the focus of the documentary?  As evident by the title, Cesar’s Last Fast, the documentary looks and is anchored by the specific 1988 act, the grueling 36 day fast Chavez undertook to protest pesticides, which exemplifies the man’s sheer strength and will.  The documentary looks to have a very spiritual and humanizing bent.  It includes very intimate, never before seen material from the family’s personal archive.  More importantly it ties a lot of the history of Union Farm Workers Union he founded in 1962, with what is going on today; asking what is the face of organizing today – critically placing a contemporary context to it.  No doubt the combination of these elements is what made this specific portrayal of Cesar Chavez so appealing to the Sundance Documentary Film Program which got involved early on with funding support.  Sundance typically supports contemporary social issues but perhaps recognizing the same issues loom just as pressing today, were drawn in by the relevance Rick Perez posits.  In addition to the money support, Sundance invited Rick to participate in the Sundance Producer’s Summit and a Works in Progress screening at the Hammer last year , a popular and overcrowded event which was accompanied by a panel with Edward James Olmos, Paul Chavez, Cesar’s son, along with current heads of the union.  And recently, the DFP had a lab down in Imperial Valley free to all, where they had another work in progress screening of Cesar’s Last Fast followed by a master class given by Rick about story structure.

CHAVEZ – BASED ON A TRUE STORY

Back in 2010, screenwriter Keir Pearson and producer Larry Meli optioned life rights to a Chavez biopic after working with the family for over a two year period in which they visited them, including Paul Chavez, and gained their trust.  Canana got involved by way of attaching Diego Luna to direct and adding Gael Garcia Bernal and Pablo Cruz as producing partners along with Larry Meli.  Also attached as producer is John Malkovich’s Mr. Mudd, and additional cast include popular Culture Clash founder, Richard Montoya. Diego Luna previously showed off his directing skills in Abel which premiered at Sundance 2010, a psychologically harrowing story about a kid who takes on the role of man in the house when his father isn’t around. His traveling documentary festival, Ambulante was recently awarded with WOLA’s Human Rights Award back in November.  Speaking for the Chavez film, over email Larry Meli was kind enough to email me back saying, “This is a terribly important story for all time and particularly in this moment in our history more so as we see manual workers being squeezed along with an entire middle class.  There were some successes and some failures but most important it shows that one person CAN make a difference.  For Mexican-American’s, it will be a great source of pride as Cesar stood up for the rights of others against the corporations and the system and won!!!”

I wasn’t able to find out what the screenplay’s take and focus is, whether it will be an epic period set retelling of Chavez’s personal lifestory, or if it will have a specific focus like the documentary, portraying his deeply personal struggles, and or pivotal marches and strikes as it relates to today. Considering Michael Peña has been cast as Chavez, and Rosario Dawson as his co-organizer, Dolores Huerta, I hope it means a considerable chunk will be about the early days, the beginning stages and HOW the literal first ever grassroots mobilization was accomplished, what later would go on to become the United Farm Worker’s Union.

Of the four library books I checked out on Chavez this week, Conquering Goliath by Fred Ross, which is all in Chavez’s words where he catches up with his buddy and mentor Fred Ross about the 6 year span in which he organized the Oxnard Community Service Organization, right before he moved to East LA to start the national movement,  was the most fascinating. For  one, the reader hears his inner doubts and insecurities (making him human and not on held up on a pedestal) and second how he learned to play ball with the growers, state and federal outfits, and interestingly how much it cost him to gain the trust of the workers.  All the strategizing he learned in these early days sets the stage for when he took on the bigger challenge of mobilizing a national union.  One is tempted to say, “The Rest is History”, but in this case, that history deserves to be analyzed and told and retold.

I’m personally thrilled that we have two films in two totally different genres that will embody deal the life history of Chavez and his efforts to make Labor Law change. In addition to reflecting on the impact he has today, I hope clear historic nuts and bolts will be told that which we could refer to in order to comprehend government policies that stand in the way of tackling the issues Chavez took on including the dangers of exposing workers to pesticides, and crucially, immigration rights.  Chavez’s Si Se Puede (“Yes We Can”, hence, my post title, “We Still Can) is an inspirational chant used today.  But its in studying the sweaty losses  as much as his triumphs that we might fully understand the weight and responsibility that comes with that statement.  Many issues we face today about immigration reform harken back to the Bracero Program, the guest worker program in which Mexicans were imported to the US to work the lands, a people caught in between Chavez’s struggle to gain rights for ‘domestic workers’.  The more I read and begin to understand the political aspect, the program set the pattern and tone for the immigration rights battle we face today.  Although in 1964 Congress voted to end it, like an ugly ‘call it by another name’ phenomenon, it exists today. A factsheet from the Immigration Policy Center (pulled from this article) reports between 53% and 75% of the 2.5 million farm workers who work in the U.S. each year are undocumented. Collective bargaining does NOT help this population; the provisions of a union contract are only enforceable for documented workers.

It’s nice to render tribute through films and books the symbolic meaning of Chavez, but its our responsibility and the filmmakers tackling this story, to responsibly learn and apply the lessons learned from his life to truly honor his legacy.  And I trust both filmmaker teams will do just that.