With no less than four reputable Latino Film Festivals and three mainstream festivals coming up this spring in the states, my dance card is filling up quick, and I’m excited to survey inside and outside the so-called niche of Latino film programming. 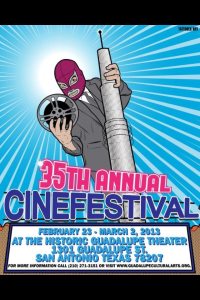 First up, CineFestival (where yours truly is proud to be a Programmer).  Put on by San Antonio’s vibrant Guadalupe Cultural Arts Center, it is notably the longest running Chicano and indigenous film festival (35 years).  Taking place from February 23 – Mar. 2, the festival’s Opening night film is Mission Park a suspenseful street crime drama about a group of childhood friends whose different paths pit them against each other, directed by Bryan Ramirez and produced by Douglas Spain. The closing night film is Filly Brown, still going strong since its Sundance premiere last year but now seeking a new distributor due to Indomina, which picked it up last year, closing up shop.   Both screenings will be accompanied by the filmmakers and cast.  In between there will be a whole week of shorts and docs including the lyrical and fierce LGBT performance club doc Wildness by Wu Tsang which hasn’t been seen much outside of Outfest and last year’s SXSW, Carlos Avila’s Tales of Masked Men, a look inside Lucha Libre, and my favorite local Texas highschool shorts showcase.  See the recently announced lineup here.  Follow us on Twitter and Facebook for updates and look out for a couple exciting additional program announcements next week.

Right behind CineFestival in date and age is the Miami International Film Festival, celebrating its 30th anniversary this Mar. 1 – 10.  Produced and presented by Miami Dade College, it is the biggest and strongest film festival for Latino programming in the nation.  The word Latino is not included in their name, yet almost half of its programming is Latino (by my count 51/117 features). I love that.

Just a few of the gems from Central and South America the festival will be screening include 7 Boxes by Juan Carlos Maneglia & Tana Schémbori (Paraguay), Polvo by Julio Hernandez Cordon (Guatemala).  In the impressive Opera Prima competition there is Edificio Royal by Ivan Wild (Columbia/Venezuela), Molasses by Carlos Diaz Lechuga (Panama) and No Autumn, No Spring by Ivan Mora (Ecuador).

By far, Miami leads the pack in programming such a diverse and fresh Latino presence. Miami is la bomba!

In April we got my hometown representing, The Chicago Latino Film Festival (April 11-25) which has historically been more of a showcase-y festival screening a number of films from South America. Although they have not announced, I’ll take it as a hint that Delusions of Grandeur is playing there as they uploaded the Chicago Latino Film Festival poster on their Facebook page.  I hope so because I really dig this quirky, set in San Francisco film written and directed by Iris Alamaraz and Gustavo Ramos about a frenzied young grunge Chicana’s journey to be independent.  The film made its world premiere at the NY International Latino Film Festival last summer.

Back to Austin from April 16-21, the 16th Cine Las Americas International Film Festival, a really excellent year round programmed non-profit which screens at the ubiquitous Alamo Drafthouse, is thankfully there to pick up the slack in supporting the Latin roots and diversity in Texas country as well as the unique bi-culture shown in their highlighted program, Hecho en Tejas section.

And last but certainly not least we got the big apple, Tribeca Film Festival taking place April 17-28.  They usually announce in early March.  Babygirl and The Girl both screening at this year’s San Diego Latino Film Festival premiered here last year.  Babygirl is a film by an Irish filmmaker, Macdara Varelly who tells quite the racy story of a mother and daughter after same guy.  The street cred is infused by the two leads who play the Nuyoricans in the Bronx. The single mother is played by Rosa Arredondo and precariously sexually blossoming teen played by unknown Yainis Ynoa who surprises in her very first acting role.  I don’t think it received half the attention it deserved.  Meanwhile, The Girl, directed by David Riiker (co-writer of Sleep Dealer) stars Abbie Cornish in a ‘subverse’ tale as an American woman who crosses the border going south to pursue her dreams.

I plan to cover as much as I can with an eye towards monitoring the tendencies and differences of the Latino Film Festival circuit versus mainstream.  Being familiar with most of the brand spanking new American Latino films out there looking for a home and audiences to connect with, I will be tracking closely throughout the year which festivals are committed to carving out a space for discovering American Latino filmmakers and stories.  All my recon will be shared here on my blog, so ojos people!