Iris Almaraz is the writer/director of the delirious, incandescent and quirky film, Delusions of Grandeur, about a naive, grunge-y chicana, Lucy who moves out of her dad’s place in Oakland, and out of her medicated dazed and confused mess, to seize her independence across the bridge when she moves in with a hopeless romantic tranny named Ilusion in the tenderloin of San Francisco. Pining for a mother who ditched her as a kid, Lucy launches into the stratosphere of self-discovery in a search for any kind of true love.  The performances of the diverse cast are so well inhabited and played with relish, the SF 90’s vibe is perfectly nostalgic and channels the city’s storied free love and psychedelia.  In essence, the theme is of womanhood tackled in a uniquely expansive manner, as seen through such a kaleidoscopic lens touching on the lights of sexuality, motherhood, wifey, gender variant roles, Madonna, all in the centrifuge of romance. Terribly sweet without the sugary sap coating, the film premiered at last summer’s NY Latino International Film Festival and is charming the independent film festival circuit across the nation.  The film is next screening at Seattle True Independent Film Festival Thursday, May 9 at 8pm and will screen here in LA, Saturday, May 18 at 8pm at the Casa 010 in Boyle Heights as part of the Reel Rasquache Film Festival.  I was already smitten with the film but now that I’ve had a chance to talk with the filmmaker, I’m an even bigger fan and appreciator of her easy yet bold candor which is felt in her work.   Check the trailer then read on for the realz scoop

Familia and barrio experience totally shape who we become and how we relate our stories. Me, I was born in Chicago’s mexican barrio and then my parents ‘moved us on up’ so to speak, to the neat, white suburbs where I was suddenly the only brown girl and my life became a back and forth between embracing and resisting my ethnicity.  How did your own coming of age inform part of Delusions of Grandeur?  Also what’s your relationship/experience with San Francisco?  I love what a great sense of place the film has with its location as character.

Funny thing is that I had the hood to ‘burbs experience too, only mine was from stints in juvenile hall to Christian summer camp, so by the time I found myself in San Francisco I had a double dose of Catholic guilt and Protestant repression. But when I got to that city the dark cloud that surrounded me EXPLODED!!!  I was a 22 yr. old virgin with a job as a phone sex operator.   My imagination ran amuck and everyday was like a post adolescent children’s book of “Dick & Jane”.  Anyway, you can imagine me trying to explain my college S&M films to my parents – “So how do you know those girls Iris…?” – “oh just from around…”

Woody Allen’s “Manhattan” played a big influence on establishing a city as a character itself.  San Francisco has so much personality that has not been captured cinematically that it is a shame. I felt I owed SF a big Thank You.

I really appreciate the multi-perspectives in the film on the fluidity of what defines a woman.  Why and what other recurring themes/narratives do you find yourself consistently exploring and attracted to as a result of your background and experiences?

I’m very fascinated with the traditionally Mexican “Virgin/Whore” dichotomy.   My own woman hood is in constant motion . Even now as a mother of two I find the realities of a monogamous relationship that now has “Dora the Explorer” as the sound track, to be humorous, adventurous and worth discussion. I think I may just be an emotional exhibitionist.   That’s usually too much for people to handle but for some reason when I put it on film it seems to resonate with people who are still stuck in a shell.  They find hope in knowing that they are not the only freaks out there.

How did you go about getting this from script to production?  Did you try to go the traditional route as the system would dictate?  Or did you always know it was going to be the hard DIY way?  What kind of support from orgs/friends/grants were you able to garner and recommend? 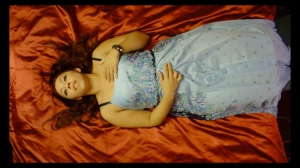 Intitially, I had a feature script that would have required a much larger budget.  There was interest in the script but not with me attached as the director.  I knew I couldn’t continue with creating dead end shorts and a feature was the only way this chubby chicana from the East Side was gonna get anyone to pay attention.    The first thing I did was sit down at the kitchen table with my dad and ask “Hey Dad you know that Quinceañera I never had, and the wedding I never asked for… well I need that money now.”  After that, other key members of the cast and crew pulled their family and friend resources together .  We also used online crowd funding to complete post-production .  Our saving grace, however, was having amazingly talented friends who committed their souls to the project.   As a young film maker you have to get used to asking for more even when you have been told “no” a million times before and make sure you keep good company.  People will rally behind you if you believe in you.

I see your work as totally distinct and a truly original American Latino walk of life.  For me it is so encouraging to see there is now more than ever, a steady incoming wave of amazing diverse storytelling from our multi-culti pockets.  Who are some emerging narrative Latino filmmakers/peers you are excited about, that we should all track?

This is such a tough question to answer for all the right reasons.  I am continuously blown away by all the diverse work right now.  It will be unjust for me to list of a few when I will inevitably  leave  out  so many.  That being said, there are two filmmakers whose work has moved and inspired me personally .  The first is Aurora Guerrero who has paved a path that young film makers can look to as a blue print for how to do it right.  Not only is she a talented unique voice but she also has an innate comprehension for how the business works. The second is Cristina Ibarra who is an amazing talent that is going to blow people away with her vision and well crafted stories.

Absolutly not.  In general I feel like an outsider in most established social groups, so I try to remain true to what my instinct tells me to do.  My priority is and always will be to make films about people.  That’s hard enough to figure out besides trying to appease others always tangles me up in someone else’s web.

How has your experience been with the Latino Film Festivals you’ve been invited to with your film?  How do they rank and operated? What do you think they do best and what do you wish they did better?

We have been so blessed this year with the opportunity to meet the most amazing people at festivals.  New York Latino was the first Latino festival we played in and what can I say, there is nothing like New Yorkers. They can be gruff and thuggy on the outside yet sweet and intellectuals on the inside.  The festival takes great risk in programming and finding new talent.  Austin was incredible because the people  of Austin are so down to earth yet out there. It was a perfect match  for our film.  Chicago Latino was the unexpected surprise in the bunch.  Well organized, elegant and classy.  I have to admit I was initially intimidated by the other film makers from Latin America who were the cream of the crop.  But the audience reassured me that I was in the right place.   It seemed as if they had been waiting a long time for a film like ours to come along.The festivals were all amazing at welcoming out-of-towners, but if I were to throw a penny in a wishing well I guess I would say it would be nice if more marketers and distributors would attend the festivals so we could figure out how to get the product to the people.

Both!! I had to have been a little, or very,  delusional to think we could pull of this film with as little as we had.  And I can’t help but feel like life is a dreary place if you don’t have a little bit of magic to make you believe that anything is possible.

What are you working on next?

My next project is “La Puta”, (what-ya gonna do, right? ) The story is set in a mythical dessert border town that nobody can remember which side of the border it was on.  But they all remember “La Puta”, the town whore who lactates a healing nectar from her breast and heals a town desperately trying not to drown in the sea of sand that surrounds them.