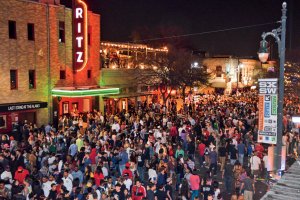 I’m getting all psyched up just thinking about this weekend when I’ll finally be seated at the Alamo Ritz on 6th street, ordering my refreshing Paloma cocktail, and sitting back to watch some wildness that SXSW Film selected. Yep, its the 2016 SXSW rodeo.

Of course I’m talking about the mega mega South by Southwest Interactive/Film/Music Festival and Conference kicking off this Thursday from March 11-20 in Austin, Texas.

So what’s the Latino presence?  Lets go wide for this one. For the past two years SXSW has tagged its Ibero and Latin American programming across film, interactive and music, under the umbrella SXAméricas. This year, Brazil and Spain have the biggest presence in the film program (3 features for Brazil, 5 films/filmakers from Spain).  For the first time in the festival’s history there is a film from Ecuador, UIO: Take Me for a Ride (although back in 2014 Austin based Ecuadorian-American filmmaker Alex R. Johnson had his film Two Step in the fest) which is notable for its rarity.  Major KEY alert, Uruguayan filmmaker  Fede Alvarez will be dropping his mysteriously under wraps untitled Ghosthouse Thriller.

I usually try to focus on only U.S. Latino writers/directors, but I’ll expand and be global for this edition as there is just too much cool filmmaking and stories coming from South America and Spain.  Also, this is by no means a definitive list of WTF is Latino but a pre-curtain look. More once I’m on the ground!

One of five directors Vice says is going to save Spanish Cinema, Carles Torrens’ second feature film, Pet is premiering in the Midnight section. From Barcelona, Torrens graduated from Chapman University. A psychological thriller in which Dominic Monaghan plays a man who runs into an old high school classmate he use to have the hots for. His creepy attempts to romance is met with rejection. Naturally, he takes her prisoner at the dogpound he works at to teach her a lesson, only to find that she is not who she seems. Torrens’ first directing feature was Apartment 143 written by Rodrigo Cortes (Buried with Ryan Reynolds). Previously Torrens directed shorts like the twisted thriller Sequence, which has played over a hundred festivals. Pet teaser below. 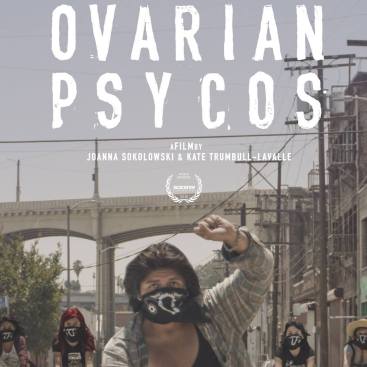 The OVA’S ARE COMING!  It’s so rad to see this documentary about the badass cycling brigade, Ovarian Psycos get its world premiere at South By. I have been talking about this one on here since its first Kickstarter, and last year’s Top Docs to Watch Out for list.  The filmmakers managed to successfully crowd-fund a second time on Kickstarter in order to fly and put up members of the collective from the Eastside  EL-Lay in Austin and represent at the world premiere.  Don’t be surprised to see the sisterhood ride through the street raising awareness for social issues that affect all women. In fact I’d follow them on Twitter so you can join in. Austin has a great rental bike program. 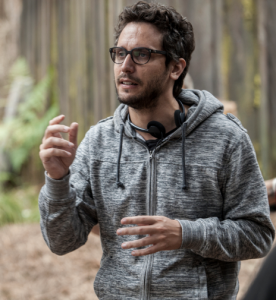 With no confirmed title yet nor film stills out there, this second original film from Alvarez is about “a group of teens break into a blind man’s home thinking they’ll get away with the perfect crime. They’re wrong.”  This is the guy who six years ago caught fire when his 5 minute short film Panic Attack made the rounds and ultimately got him the gig to helm the 2013 Evil Dead reboot which is bananas.  Only info that is clear on this one is that Jane Levy stars, its from Sony Pictures and Sam Raimi produces. It’s been referred to and on IMDB its listed as A Man in the Dark.  Fede has also been rumored to be director of Warner Bros’  Dark Universe. Fede has also directed episodes of Robert Rodriguez’s From Dusk Til Dawn TV series.

A thriller set in the dry outposts of Texas in which border patrol men, two of who are played by Latinos, Clifton Gonzalez and Gabriel Luna, stumble onto evidence that may lead to a plot between the cartel and one of their own. I read the script a while ago and remember vividly visualizing the filmmakers’ cinematic western noir intent. Given the score is co-written by The Revenant composer, Bryce Dessner, and it the film shot by Jeffrey Waldron, a versatile commercial, documentary and indie film D.P, it will surely deliver on that front.  Kwedar, who previously produced the documentary Rising From Ashes, about Rwanda’s first ever cyling team, teamed up with Texan filmmaker, Clint Bentley to write his feature directorial debut. I’m eager to report back on this one.  Last border fiction tale I saw that flexed its thriller genre (unfortunately over story) was El Desierto from Mexican Jonas Cuaron which ultimately suffered from oversimplistic storytelling. 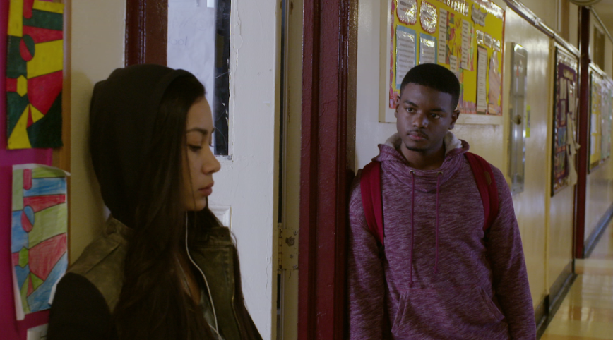 FROM NOWHERE co-written and directed by Matthew Newton

In Narrative Spotlight, From Nowhere is the film adaptation of the play, No One Asked Me written by Kate Ballen, whose 10 year experience as a counselor at a Bronx high school where she helped undocumented students navigate the college admission process became the basis and inspiration to tell this story.  Australian director/actor Newton directed No One Asked Me as part of Fringe NYC festival last fall.  Newton previously directed Three Blind Mice which premiered at the Toronto International Film Festival.  Julianne Nicholson ostensibly plays Kate as the teacher and the students are played by J. Mallory McCree (Quantico, We Need to Talk about Kevin), and newcomer Octavia Chavez-Richmond.

INSATIABLE directed by Brett A. Schwartz

Homaro Cantu was a goddamned trail blazer.  Legend has it that he came to Chicago with $300 in his pocket and camped out at famed master chef Charlie Trotter’s until he gave him a job.  He shortly thereafter became his sous chef. In 2003 he opened up his avant garde restaurant Moto which became a prized Michelin star rated restaurant and blew up Chicago on the culinary map. He was a beloved figure in the chef community so the news of his death last spring at age 38 rocked everyone’s world.  My sister, Diana Davila who is a chef in Chicago idolized Cantu so much that she had her engagement dinner there.  Apparently filmmaker Brett A. Schwartz was granted a fair amount of access for the three years he followed him. The aptly titled film focuses on Cantu’s game-changing culinary practices, mad passion for the intersection of science, art and health, and deep imprint he left as a molecular gastronomy pioneer.

THE SEND-OFF by Ivette Lucas and Patrick Bresnan

I previously wrote about Ivette’s film Mexican Fried Chicken. Her new documentary short with filmmaking partner Patrick Bresnan premiered at Sundance earlier this year.  The film is a fly on the wall look at a group of seniors from a Central Florida high school as they they prep and dress for the big prom affair which includes their local block party show where the royally dressed young couples pose for snaps.

A first film, and a really moving half hour doc short about Phil who has stage four cancer and decides that to ‘heal’ himself he is going to trek the 500 mile Camino de Santiago pilgrimage in Spain.

EAT MY SHIT written and directed by Eduardo Casanova

You know you want to watch.  Here is the full 3 minute shit.

The 23 year old filmmaker’s bio: Cinema is what I truly believe. Cinema is the cause and solution for every trouble I have. Cinema to me is like morphine to Bela Lugosi, like Richard Burton to Liz Taylor, like red lights to Dario Argento, like big boobs to Russ Meyer, like Lynch and the dwarfs.

Trailer above for the 20 something min short from Spain which was incubated and premiered at the Cannes Film Festival.   The film’s synopsis: “Victor likes to experiment with his gender. He doesn’t know if he feels like a boy or a girl.”  The actor who plays Victor, Alba Martinez is magnetic. Bravo to Ian, a 27 year old transgender filmmaker from the south east Mediteranean coast of Spain for directing the performance and bringing this story to the fore. 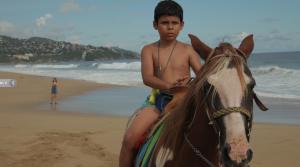 I previously wrote about this first feature in my last Mexican film roundup post. Making its U.S. premiere after playing Toronto up north and Los Cabos down South, the film is a keenly felt and compelling story set in a run down Acapulco during Easter holiday.  You might recognize Tenoch Huerta from Dias de Gracia, Gueros, Mozart & The Jungle. 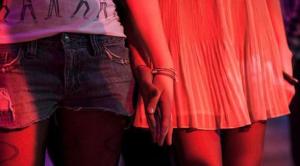 UIO: TAKE ME FOR A RIDE co-written and directed by Micaela Rueda

LGBT film from Ecuador, a co-production with Mexico and Colombia. Michaela has spent the last five years working on her first fiction feature debut, working from a script by Juan José Valle.  You can see the trailer on the film sales agent site M-Appeal 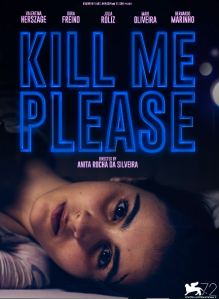 First premiering at the Venice Film Festival this impressive next level teen angst tale is a first feature from Brazil/Argentina. Set in a newly developed city in Rio de Janeiro the story’s backdrop is a wave of murders which calls 15  year old Bia’s attention. The filmmaker says, “Bia is someone who wants to kill herself yet wants to carry on living, experiencing everything to the edge – she wants to be killed but also wants to kill, wake up the next day, and do it all over again.”  Sounds dope.

DEAD SLOW AHEAD co-written and directed by Mauro Herce

JULES AND DOLORES cowritten and directed by Caito Ortiz

Selected in the Visions section, the more ‘audacious’ filmmaking section, this 1983 set Brazilian caper about stealing the world cup trophy looks like pure boogie down fun.  You can see trailer here.  Caito Ortiz is on the director roster of slick advertising and entertainment company Prodigo Films.

THE SPACE IN BETWEEN – Marina Abramovic and Brazil

Directed by the Sao Paulo cinematography artist, Marco Del Fiol.  All you need to know is that this is Marina’s trip and we are along for the ‘hardcore and spiritual’ ride.