I went to support my esteemed Programmer friends participating in the Master Class that Women in Film put on last night called “What Film Festivals Want.” Representing the top festivals in Los Angeles was Kim Yutani, Senior Programmer at Sundance Film Festival, Roya Rastegar, Director of Programming at LA Film Fest, Jacqueline Lyanga, Director of AFI Fest, and Lucy Mukerjee-Brown, Director of Programming at Outfest.  Executive Director of WIF Kirsten Schaffer, formerly director of Outfest, was perfect to moderate the panel, keeping it new filmmaker friendly and full of insight.  Since I have the pleasure of knowing and/or working alongside all the ladies on the panel, I knew it wasn’t going to be another diluted, unproductive, bland conversation on Film Festival Tips. There were about 50 people there ($20 admission for non-WIF members), and it was by and large women filmmakers, across all colors and ages, from my friend, young dancer/actress Carmen Corral who just wrote and directed her first short film, to an audience member who shared she has just finished her first film at 67 years young.  The difference in practices and opinions heard is proof that each festival and each film festival Programmer has their own brand of curatorial focus, taste and sensibility.  As Kirsten summed it up, its worthwhile to listen to each of their takes, but do not forget that ultimately you have to follow your own instinct. 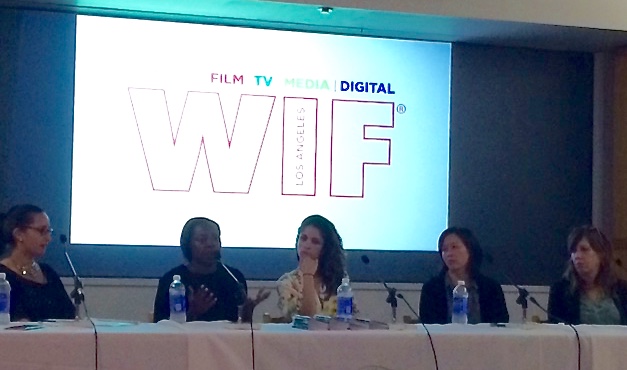 Briefly each festival’s mandate: AFI Fest takes place in November so they screen LA premieres of the most acclaimed as well as under the radar international gems of the year. A big chunk is curated from other festivals, however they do have a Breakthrough section which they cull mostly from submissions. Also it offers its program for FREE!  Outfest seeks to obviously show films from the LGBTQ community.  However, Lucy noted more and more the programming has matured to one where LGBTQ is not the drive of the storyline but rather a perspective through which to explore different genres.  LA Film Fest has gone through a programming shift this year and it is more closely aligning itself with parent nonprofit Film Independent’s mission to “support artists who embody diversity, innovation and uniqueness of vision”. This year the festival has an unprecedented 39 world premieres and nearly half of the program is made by women and people of color. Sundance Film Festival – what can we say about the original rebel.  U.S. Competition, Next, New Frontier and Midnight is the discovery zone heard around the world for breaking innovative stories and talented storytellers.  Sundance’s submissions increases each year.  It received more than 12,000 submissions for the 2015 festival. Around 8,000 of them are shorts – of which they show 60-70.  Yep, that’s less than 1%

On the topic of WHY IS MY FILM (S) NOT ACCEPTED. I can see why deciphering the festival code; “It is not a right fit” can be frustrating for filmmakers to hear.  It is a catch-all of saying a possibility of things.  First thing to remember however is that just because you don’t get into a festival it does not mean your film does not have artistic merit or deserve a platform.  You are talking about 3-4 people at one festival who watched it but did not respond ENOUGH to champion or select it in the festival (My own personal note as Programmer; you have to kill your darlings and pick your battles in the room).  A lot of times the reason your film may not get in is simply mathematical.  There are not enough slots at a festival to select all the films the Programmers like.  Sundance can theoretically program another entire (just as solid) festival program after locking their lineup.  Maybe your film does not get in because that particular festival does not offer the section, or cater to that particular focus/niche your film covers.  And yet another reason might be your film may be one of several films that tackles very similar issues or has a very similar storyline to other films Programmers see that year.

WHAT CAN I DO TO RAISE MY CHANCES? Sounds like common sense but follow submission instructions is number one tip (seriously not following instructions is a number one Programmer pet peeve).  Not all festivals are the same.  Some want press kits with film submissions.  Some of the panelists encouraged the audience to write cover letters while others admitted they never read them. (Personal note: If you have something relevant about your background that you think informs your vision then by all means write up a paragraph).  Roya made the point that if you had a crowdfunding campaign, or have a cast member who has over 2 million subscribers on Youtube that usually indicates you already are building an audience that is invested in your film, it doesn’t hurt for the festival to know given their concern is selling tickets to sustain the usually nonprofit’s activity. It is definitely vital to communicate these things once you have been selected so that the festival can disseminate the distinct and soundbyte aspects of your film to ‘pitch it’ (first film shot in Cuba since 1959, first indie film shot in Little Armenia).

CRITERIA:  Screeners are asked to submit a detailed synopsis of the films they watch and  rate technical proficiency, character and story development.  But inspired (and ripped off) by Sundance’s evaluation forms, most festivals want to frame it around ORIGINALITY OF VOICE/EMOTIONAL IMPACT. Roya mentioned that she tends to be  more forgiving of production value if she recognizes there is a strong, rarely heard voice driving the story.  Lucy mentioned she enjoyed abiding by this guiding principle during LA Film Festival’s programming process.  Knowing that films made by women/people of color tend to be the least funded and least commercial having this awareness is key, and underlines the bottom line criteria of a Programmer or anyone for that matter, wanting to find that film that can MOVE people above all.

HOW DO I KNOW WHICH FESTIVAL IS RIGHT FOR MY FILM?  You can do your homework and check out the archives of the films that a festival has played to see if there is some alignment, said Jacqueline.  But take it with a grain of salt.  As mentioned by Roya there is a tendency of folks to carbon copy what they think is a festival film, and making a film driven by the desire to get into a festival tends to backfire.  Look into international festivals, smaller niche festivals.  Lucy, who is also a filmmaker, recalled being rejected by all the major festivals until they submitted randomly to new Arkansas festival, Bentonville where they ended up taking best prize.  (Note: Sign up to Withoutabox. You’ll have to do some digging but you can do a search by region, niche, specialty to find the most suitable festival.) GETTING THE MOST OF YOUR FESTIVAL EXPERIENCE. Squeeze your Programmers for advice. If you are wondering whether you should contract a publicist or a sales agent ask us for recommendations, encouraged Kim.  They have the relationships and know the sensibilities of all the established and emerging industry.  In many ways this is Programmers’ second job after locking.  Adopting film teams leading up to the festival who they can shepherd up the mountain.

DO YOU REALLY WATCH EACH FILM?  Why do people LOVE to ask if a Programmer ‘really’ watches a film from beginning to end??  That is our job!  First of all we get paid to do it.  Second, as Kim mentioned, the worst thing for a Programmer is to have ‘missed’ a film.  Make no mistake, if a film does really well at a festival or comes out somewhere else, and you don’t recall seeing it, you go back to your database to make sure it was fully considered by someone on your team (and see who the hell may have passed on it).  Senior Programmers do their due diligence and review screeners’ coverage, ratings, and exports lists whether it be by region or filmmaker background. Especially nearing the end of progamming lock, they sweat over making sure they saw everything they should, and some actually dig deep into the lower ratings like films that got a 1 out of 5, just in case the screener was turned off by the premise. That strong negative reaction could very well mean a film is polemic and possibly brilliant because of it.

WHAT IF I DON’T GET IN?  If you know your film has an audience, who cares if your film doesn’t get into festivals.   Get a network of filmmaker and programmer friends.  Get feedback. Festivals can’t supply feedback as a rule because of the volume but if you have a Programmer friend or trusted industry acquaintance ask them for input.  The dangers of asking friends and families for feedback on your film is that it usually won’t be critical.  As Lucy pointed out and I think everyone was in agreement;  We (read: good Programmers) understand that filmmakers set out to make a good movie. The ultimate criteria is asking ourselves “What was the filmmaker trying to achieve and how close did she/he get to it in the execution?”

Last words from the panelists: Lucy:  Keep making films Jacqueline:  Be bolder and louder. Kim:  Support other female filmmakers Sundance opens submissions in July.  In August, Sundance’s Next Fest will unspool a few film and music experiences at the Ace Hotel. Outfest will be announcing their program soon and will take place July 9-19.  Coming up soon is LA Film Festival, June 10-18.    AFI is currently accepting submissions until July 24 for its November festival.  Women in Film is accepting submissions until June 16 for their Finishing Films Fund.  Shorts and feature length films that are 90% complete are eligible.  Grants range from $1,000 – $25,000.