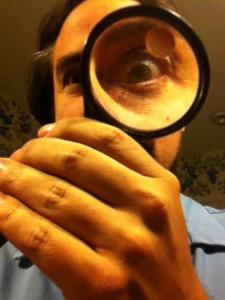 Inquiring minds want to know, what has the Peruvian-American multi-media artist and filmmaker of the radical film Sleep Dealer been up to since he broke through at the 2008 Sundance Film Festival.  I had a chance to catch up with Alex and find out what’s shaking.

Sleep Dealer had been percolating through development for a few years when it participated in the 2001 Sundance Institute Screenwriters lab.  It premiered in the festival’s US Dramatic Competition in 2008 where it was bestowed with the Waldo Screenwriting Award for Alex and his co-writer David Riker.  The ambitious and thoughtful genre bender (eco/romance/sci-fi/adventure/socio-political thriller), was a uniquely original feature debut which earned him lots of buzz including a spot on Variety’s Ten Directors to Watch. On the heels of all the Sundance momentum, Alex was courted around town for various projects, mostly speculative script work (aka free labor).  One of the projects he became attached to write and direct was a film based on the Wired article “La Vida Robot,” then being produced by Salma Hayek and John Wells.  Meanwhile, Sleep Dealer was released by Maya Entertainment in April 2009. Unfortunately, Maya’s theatrical releases struggled to make much profit (the company quietly shuttered last year to dissolve its debt). Sleep Dealer averaged 2k in its 18 booked theaters NY/LA  Opening Weekend engagement. My opinion?  Lack of a strong and savvy marketing campaign along with Maya’s model of booking the film at its out of the way fringe theater markets hurt the film’s shot at targeting the audience it eventually found elsewhere.  And where it did find a cultish nerd-like audience was in the educational space.  Alex has traveled to over 50 campuses and continues to do so in order to discuss and engage with the complex layers and themes the film generates – a testament to the heavily research based scientific, sociological and immigration alchemy of the film.   Let’s check in, shall we?  {redacted transcription of our recorded conversation}.

What are some of the exciting things you’ve worked on immediately after Sleep Dealer?

David Riker and I developed a TV series.  It’s called “Blink!” It’s about a woman who suffers a strange accident, loses her eyesight, and is given digital retinas, a technology that is currently being developed.  Shortly after she starts to see again, she realizes something is terribly wrong – her head is transmitting.  You can see what she sees through a live video feed.  She doesn’t know if her eyes are malfunctioning, if she’s been ‘hacked,’ etc.  The show follows Blink as she tries to unravel what’s inside her head and the possibility that she is part of a conspiracy that might even be altering her reality.   We still have the material and are looking for a partner for it, we’ve had different partners along the way.

One of the more surprising developments for me was an ongoing collaboration with the community of activists working around the cause of immigration.  The National Day Laborer Organizing Network became aware of my work through Sleep Dealer.  They are really active working with day laborers in this grassroots way, but they also have a unique cultural strategy.  They happened to be in touch with Manu Chao, the legendary and popular World music artist, who in his work sings about the experience of migration. They put me in touch with him and we produced a video in Arizona. We did the same thing with Ana Tijoux, a Latin Hip Hop artist, and we are dialoging with other artists like Zack de Rocha and La Santa Cecilia, a local LA group Latino music mashup group.  It’s been deeply fulfilling not going through agencies but rather activists that are committed to the same values that I am committed to.  So that kind of has been my reality; partly working with these activist groups on these cultural projects, partly shopping around ideas in this system like the Sci-Fi TV series, and partly supporting Sleep Dealers’s after life.

You also work with other filmmakers on an ongoing basis, talk about your collective:

I’ve been working with other filmmakers for the past 14 years through a small distribution company called SubCine, like subliminal, subliminated.  The idea behind the name is that experimental films, documentaries and risky fiction films are already shut out of the mainstream film culture, so then if you are making that kind of work from the Latino perspective its yet another level of marginalization.  Its like we are the outsiders of the outsiders.  It’s an exciting place to be, to think, imagine and attack from.  We are a small collective of filmmakers like myself, Jim Mendiola Gregorio Rocha, Jesse Lerner, Cristina Ibarra, Natalia Almada, Dolissa Medina.   A lot of us were making our films in the 90s and selling our films individually.  We decided that instead of selling them individually, to compile a catalog together.  From one day to the next, a distributor was born.  We have a warehouse that keeps the films, does all the fulfillment and billing so we don’t have to lick the stamps anymore. Most traditional distributors pay filmmakers 40% minus expenses.  We pay 70% with no expenses taken out of that.   We are a very slender operation but set up to make the sales and get the money to the filmmakers. Right now we have almost 50 films in the catalog and over 20 filmmakers that we work with.  I manage that on a month to month basis as one of my many other side projects.  It’s been super fulfilling because its getting the films seen. They are sold to only a little segment; the libraries, universities and colleges to be used in classroom.   Those institutions will pay $300 more or less for a DVD because they are using it in the institutional context. Then that work is seen by young people hungry to learn, whose ideas about the world and ideas about film are being shaped, so its a win-win-win.

That’s an interesting model, you think there is room for more of these kind of distribution platforms for Latino filmmakers?

We were inspired by New Day Films, a social issue documentary distribution collective. It’s a lot of the same thought; Lets not work alone, lets work together.  If you sell your film maybe the person who bought it would want to buy my film. It’s like this collective spirit of a distributor that’s owned by the filmmakers.  The educational market doesn’t sound glamorous, but it’s absolutely essential for students to see the wide variety of films and it gets to them when their brains are soft and squishy and malleable.  It’s an influential moment to reach that audience.  And they still pay – librarians still care about getting a licensed copy of a film for their collection and are willing to pay for it.  In a day and age when nobody seems to get paid, this market is a unique space to be.

With all these side projects and day to day busy-ness and constant fellow filmmaker collaboration and stimulation how do you concentrate on developing your own projects and tell us what personal project are you focusing on now?

I have a curious mind and active imagination, which is a curse and a blessing.   Definitely over the years I have had many ideas and I try to do everything I just mentioned plus develop my own material.  About a year ago I got interested in the story of a legendary Chicano activist – somebody who should be as well known as Martin Luther King, Malcolm X or Cesar Chavez but who is not.  His name is Reies López Tijerina.  He led an armed movement in New Mexico to reclaim part of the land for the original Mexican families that had settled there before it was the United States – the land that was stolen after the war with Mexico. Tijerina is a fascinating character and there are parts of his story that are like a Quentin Tarantino film. Like he would wear a suit in the desert while armed, trying to arrest police officers….it has that kind of great genre and humor in it, but it also taps into extraordinary realities and histories about The Southwest which have, for the most part, been forgotten.

How much does the general public know about this man?

I think the general public knows close to nothing. People who study Chicano history would run into his story but not everybody even in that category…We live in a strange age where there are 53 million Latinos in this country and yet if you ask, ‘Who are some great Latino figures in U.S. history?’ most folks can’t name five.  Whether it’s the result of a concerted effort or not, the history is missing.  I mean, you look at Arizona and they are banning books about Chicano history, you start to think maybe it is concerted.  Either way, you don’t get 50 million people here overnight.  There’s a long history that has been erased and its part of the duty of artists who define themselves as Latino to rescue parts of that history because we deserve to know it.  Tijerina is one of those incendiary, wild and fantastic stories and there should be many films about it and yet it is exactly the opposite.  He’s nearly completely forgotten and he’s not the only one, there is a whole series of these kind of figures that have been swept under the rug.  It’s a problem and also an opportunity because it is definitely time now to think of ways that are visually exciting to tell these stories.  When I talk about history, it’s not to put someone to sleep, its not a Ken Burns treatment. This is life and death, sex, people fighting over billions of dollars that are at stake, the future of the country  – these are high stakes, thrilling stories going back to days of the Conquest up until today.

How would you go about rescuing these histories and making it modern, relevant and accessible in order to capture people’s interest in unknown historical figures?

All the way through, if you look at any chapter in Latino history, and as I would define it, it starts with the conquest when the Spanish meet Native Americans and start to kill each other and enslave each other and make babies together and create a whole new race  -is there anything more Shakespearean? More dramatic?   No.  Obviously Mel Gibson took a stab at that time period with Apocalpyto, which was wildly successful commercially.  Why? Because he used a kind of genre approach.  It’s not a historical film, it’s an action film. Now I didn’t love the film but I can respect that it’s a piece of pop culture that is also telling a part of history.  Do I love its point of view? No.  But I respect the craft.  And so starting with that going up to, anywhere you drop the needle on Latino history there is something equally dramatic going on..…In the US Mexico war countless moments and characters and stories could be told through the genre of a heightened western that would be incredible.  Quentin Tarantino has just shown that films that are set in historical contexts but that us the energy and aesthetics of genre filmmaking can be wildly successful.  So the approach needs to be creative, elevated, the approach needs to push the envelope.  You can mine these histories for all kinds of fantastic narratives.  And, of course, the future can be mined as well.