Since 2003, the Morelia Film Festival has been nurturing filmmakers and audiences, and has rooted its niche as a discovery festival of up and coming Mexican filmmakers.  At the same time it’s earned a prestigious reputation for its expertly curated sidebars that would make the most hard core cinephile drool, and for the Festival’s unparalleled attention and hospitality to their guests, Invitados.  Each year the Festival invites renowned international cineastes to participate in showing their films for the first time in Mexico, in turn enticing them to experience the vibrant scene of Mexican Cinema in the most charming historic city of Morelia, Michoacán.

To celebrate its 10th year anniversary the powerhouse boutique festival has put together an epic program consisting of over 2oo hand picked films as part of special screenings, tributes and homages to compliment its more solid than ever Mexican Competition made up of 25 documentaries, 45 shorts, 9 narrative features, along with 12 films from the hosting state of Michoacán.  Among the special guests this year, English filmmaker Sally Potter, Iranian filmmaker Abbas Kiarostami, and Chicano filmmaker Gregory Nava.

I thank the tirelessly dynamic Director of the Festival, Daniela Michel for talking with me about the Festival’s programming then and now. {redacted and translated}

C:  From the return of Regyadas with his highly anticipated Post-Tenebras Lux, who was one of three Mexican directors awarded a prize at Cannes (along with Fogo by documentary and fiction director, Yulene Olaizola, and Después de Lucía by Michel Franco which is Mexico’s foreign language Oscar entry), to  Locarno Film Festival’s Carte Blanche spotlight of Mexican works in progress, 2012 has been a stellar year for Mexican films.  The Festival is showing nine narrative features in competition, seven of them world premieres by first time filmmakers, reflecting this building breakthrough momentum…

D: Yes, we’re thrilled that Cannes was a big year for Mexican film.  We were honored to have Artistic director, Thierry Frémaux as a guest at the Festival last year.  He’s truly been supportive of Mexican films and we are profoundly thankful.  When we first started the festival there just weren’t enough features films to warrant a solid competition program.   Our mission was to build a program made up of the next generation of filmmakers and support them.  We weren’t interested in showing already established Mexican filmmakers.  In 2007 we had our first narrative feature length competition and we were grateful for having such a prominent jury comprised of Trevor Groth, Director of Programming at Sundance Film Festival, Peter Scarlet, at that time Artistic Director of Tribeca Film Festival and Cecilia Suarez, a talented Mexican actress.  They bestowed the Best Film award to Nicolás Pereda’s first film, Where are their Stories.  Pereda has gone on to be a prolific and singular talent.   We are screening his 7th film out of competition, The Greatest Hits.

C: Documentaries are an integral part of the festival, this year the festival is showing a record breaking 25 documentaries in competition.  Typically the Mexican documentary genre has generally fit into the ethnographic study type. How has this changed over the years?

D: We are seeing more intimate and personal journey type of stories that are breaking with that notion that there is only that kind of Mexican documentary.  There are looks of forgotten history like Flor en Otomi by Luisa Riley about a young female guerilla fighter who disappeared following a violent raid, or Convict Patient by Alejandro Solar Luna about a man who attempted to assassinate the president in 1970 and is now homeless and mentally unstable.  There are more experimental films, more personal portraits like Carriere, 250 Meters by Juan Carlos Rulfo and Natalia Gil about the inspiring writer and Bunuel collaborator Jean-Claude Carriere,  Diario a Tres Voces by Otilia Portillo Padua, a compelling multigenerational look of three women in relationship to their age, Miradas Multiples (La Maquina Loca) by Emilio Maille which is about the great cinematographer Gabriel Figueroa.  Definitely, Mexican documentary is expanding its horizons.

C: Last year you had Luis Valdez as an honored guest and screened his seminal Chicano film, Zoot Suit.  This year you are honoring Gregory Nava with a screening of El Norte and Mi Familia.  What prompted this recognition of Chicano filmmakers at the festival?

D: We’ve always had a section called Cine Sin Fronteras (Cinema without Borders) curated by Jesse Lerner an academic expert on border films.  While we had not, up until last year, recognized such well known chicano figures like Luis Valdez we’ve shown the work of lesser known, independent filmmakers.  We felt it was overdue and important to introduce chicano films to mexico.  Not necessarily a border crossing story but the perspective of Mexicans living in the United States.  Certainly Luis Valdez deserved a homage here in Mexico. Unfortunately chicano cinema is not well known in Mexico.  We are very happy that Gregory Nava who we highly respect, will be joining us this year.

C: The Michoacán section.  The festival recognizes the talent of filmmakers from the hosting state with its separate competition section.  How do you make sure this section does not fly under the radar or get lost in the shuffle since it competes with high profile national and international films.

D: Well, first of all the caliber has to be there and I think that since the festival’s inception, the filmmaking scene in Michoacán has been greatly stimulated as there’s been more production, filmmaking has become more accessible and over the past ten years we’ve seen the production value and quality  getting better and better.  Not only indigenous filmmakers which was very important to us like Dante Cerano and Pavel Rodriguez but filmmakers who were born and raised there and may live elsewhere.  We make an effort to give these films the highest visibility by giving them the best time slots so that the public can easily find and discover.

C: Given the Festival’s success, there must be a desire and pressure to continue to expand and grow.   How do you navigate the appeal of complimenting the festival with an increasing number of programs yet work to keep the mission’s integrity?

D: Interest in participating in the festival has certainly grown but we can’t lose focus that our main goal is to support the young mexican filmmakers so we select only the best work out there, always.  Its important not to have any kind of institutional or political ties that might compromise that mission.  One of the sections I most love which we created in 2008, based on the invaluable recommendation of Bertrand Tavernier who has an impressive knowledge of film, is called Imaginary Mexico.  This section showcases work connected to Mexico imagined by foreign filmmakers abroad, revealing their perception of Mexico.  It’s a rich, eye opening trove.  For instance Mexico as seen by Hollywood.  This year we are showing a number of Sam Peckinpah’s films (The Wild Bunch, among others). Two years ago we had the extraordinary gift of having Quentin Tarantino present Sergio Corbucci’s spaghetti westerns about the Mexican Revolution.  These films had been previously banned in Mexico for its scathing portrayal of the revolution….

It’s a rich diaspora.  The Festival supports the future of Mexican Cinema with the best work by the next generation of filmmakers just starting out.  It celebrates Mexico of the past, through classics and retrospectives like this year’s homage to cinematographer Jose Ortiz Ramos born in the state of Michoacan, and the other, films about Mexico from outside of Mexico.   We attack it on all fronts.  This intersection of  borders, indigenous films made by indigenous filmmakers who have a permanent space in our festival, film students and history.

C: About the Morelia audience

There is a big population of university students which combined with the city’s strong tradition of historical culture, we felt there was potential there.  It wasn’t easy at first.  I remember programming a Woody Allen film against a block of unknown shorts.  We realized that once the tickets for the Woody Allen movie sold out, people who weren’t able to get in, naturally found their way into the shorts program.  We are indeed grateful for that audience.  Obviously showing Bela Tarr’s epic eight hour Satantango last year would not have worked had we programmed it the first year.  We owe a lot of this audience development to our extraordinary colleague and dear friend Joaquin Rodriguez (founding programmer who passed away earlier this year).  He worked year round developing that audience.  His  film appreciation classes there would have space for twenty, and five times the amount of people would show up.  This edition is dedicated to him for his consummate professionalism, passion and brilliance.

C: We are a few days away from the 10th edition.  How are you feeling now and do you remember how you felt ten years ago at this point?

D: It was one of the most stressful moments in my life because I had no idea how it was going to work.   It was terrifying.  Today I feel very blessed to have this incredible team because the work is put in by all of us and it would be impossible without the dedicated group assembled  who I admire and respect very much. …Every year there is stress.  But like they say “If you stop feeling the nerves then quit”.  I’m a huge cinephile so I love sharing this gift of film with new audiences.   Its endless, there is an endless vault of films to be re-discovered and that’s what I love best that these films return to life.  You learn a lot about life seeing film. 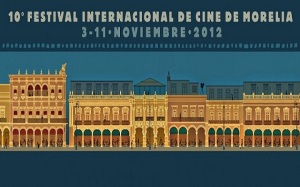