Quick answer: Not much.  But it’s too easy, not to mention unproductive, to bemoan and criticize awards shows for their lack of recognition when it comes to Latino writers/directors.  Unfortunately there isn’t much of an eligible pool for these big awards shows to consider (why that is -for another post).  Also, for those new to my blog; I define Latino strictly in the American generation/context, not international, and I focus on creators (writers and directors).  Now lets celebrate who we do got because it’s pretty cool that of these few American Latino writers/directors in the Golden Globes mix, they happen to be all WOMEN!

Although it is the showrunner/producers who accept the Best TV categories, the writers and directors of the nominated shows obviously are part of what makes the show stand out. To that end, lets give props to the ladies that contributed to the critical success of these nominated series:

In the Best TV Drama series category, there is Jessie Nickson Lopez, staff writer on Netflix’s STRANGER THINGS.  The young Columbia University grad was raised between Canada and the U.S. and has Venezuelan roots.    After a brief stint at ICM followed by being staffed on A&E’s short lived The Returned, she worked as assistant to Moira Walley-Beckett (Breaking Bad EP/writer) on STARZ ballet drama, Flesh and Bone which was nominated for a Golden Globe last year in the Best Television Limited Series category.  Stranger Things debuted this summer to much acclaim and hype with eight episodes.  She wrote episode 6: The Monster.   The show will be back for season 2.

In the Best TV Comedy series category, Mexican-American Linda Mendoza has directed 4 episodes over the course of the 3 year old series BLACKISH from ABC.  Mendoza has been directing hit television show episodes on the regular ever since The Chris Rock show on which she directed 13 episodes during 97-98 season.  Except for her 2003 feature Chasing Papi for Pantelion, she has stayed entrenched in the television business.

WINNER ********Also in the Best TV Comedy series, Panamanian Janizca Bravo directed an episode of another new show that came in hot this year, ATLANTA. Her episode was Junteenth.  Bravo has a great eye and very soulfully brings a dark comedy to her work. She has directed a number of short films as well as a virtual reality project about police brutality that was featured at the Tribeca Film Festival.  She is about to premiere her feature debut, Lemon at this month’s Sundance Film Festival, so you’ll be hearing a lot more of her in the next few weeks.

As mentioned, award shows can only be as representative as the eligible pool so to be fair, what features and television shows were eligible and were snubbed THIS YEAR? I regret to say I lack hard data and to be honest I’m not as well versed in the television landscape as I am in the indie film world  (new years resolution!).  A few I do know who we’re technically elegible bear mentioning; Danielle Sanchez-Witzel who is the showrunner on The Carmichael Show on NBC didnt get any GG love. Empire which was nominated last year has a writing room that includes Carlito Rodriguez who is also co-producer. He previously wrote on the first season of HBO’s The Leftovers. Orange is the New Black which boasts a killer Latina cast who didn’t get recognized- includes Marco Ramirez as writer.  The Get Down includes Jacqueline Rivera as staff writer who also directed an episode. While Gina Rodriguez gets her third nomination (and sole Latina acting nominee) for her acting on Jane the Virgin the show didn’t get any love this year (It was last nominated in 2015 the year of its debut).  The show consistently engages Latina scribes, Emmylou Diaz and Valentina Garza, and director Zetna Fuentes.  In previous years Hulu’s hit show East Los High received a number of daytime Emmy Awards but the Globes never recognized the show which was created by Carlos Portugal and included a robust number of Latino writers.  NBC’s Shades of Blue wasn’t nominated which includes writer Benjamin Lobato who also wrote on USA’s Queen of the South another show that premiered this year.  Peter Murrieta wrote on TV Land’s Lopez show.  Just recently premiered, so not part of this year’s submissions, Netflix’s One Day at a Time counts Murrieta as a writer and notably  Gloria Calderon as showrunner (next year?) 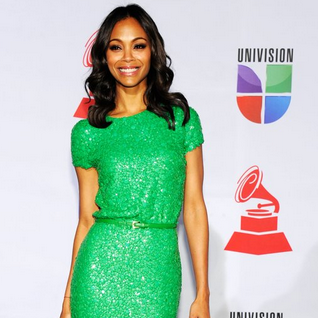 Last year we had Ricky Gervais prophetically introduce Eva Longoria and America Ferrara as folks our future president wants to deport.  Conceptually (painfully) funny to prove a point/Brit rub it in move, except both are American citizens. The ladies proceeded to do a bit on people mistaking them for other famous Latinas. Among this year’s presenters, Zoe Saldana who plays Ben Afflecks love interest in his period gang drama Live by Night is the only American Latina on deck. The Dominican American is known to speak flawless Español.  Her body of work is fascinating in that she’s managed to play Black, Latina and now simply blockbuster actor (Guardians of the Galaxy, Avatar). Saldana has a production company Cinestar which she runs with her sisters and has a first-look deal with South Shore Television and Pantelion Films, the U.S. joint ventures of Grupo Televisa and Lionsgate. Hopefully they manage to bring up and work with some talented Latino creators.

In the Best Original Song category, musical star Lin Manuel-Miranda was nominated for his work on How Far I’ll Go with Mark Mancini and Opetaia Foa’i.