Glad you asked.  Now that the entire programming slate has been announced for the 2013 edition of the Sundance Film Festival, let’s take a look at the representation of Latinos in the broadest, most diverse sense, because that is what that ill-defined lump category encompasses.  {Full disclosure:  I work as a Programming Associate for the Festival.  These are not reviews but an insider breaking-it-down preview}

At first glance the Latino representation may not seem obvious.  Nor may it seem as strong as the films and filmmakers from the African-American and LGBT community representing, or the record breaking number of female directors’ – each group highly visible by their nature.  We may not have a Mosquita y Mari or Filly Brown, two fiction films, which broke out of the festival this past year, but we do have two hugely relevant and urgent documentaries exploring the effects of a bi-cultural U.S. & Mexico social fabric, NARCO CULTURA which explores the phenomenal music and social culture being shaped and perpetuated by the influence of Mexico’s violent drug cartels, and WHO IS DAYANI CRISTAL? an innovative doc-fiction hybrid produced by Gael Garcia Bernal that will hopefully re-divert much needed attention back to the US/Mexico border.  By the way, Who is Dayani Cristal? screens in the high profile DAY ONE slot.

I personally embrace the responsibility of changing the conversation as to what constitutes representing American Latinos.  First, by focusing on both the above-the- line-talent (filmmaker or actor) AND storyline/subject.  The second part is highlighting the second, third, fourth and so-on generations of filmmakers. What about the filmmakers in the festival like Kyle Patrick Alvarez (C.O.G),  Liz W. Garcia (The Lifeguard) and Eduardo Sanchez (S-VHS horror anthology and co-director of the infamous Blair Witch Project)? I don’t know these filmmakers personally so I can’t speak to how they might view their cultural identities and how it informs their work, if at all. But I do believe it is worth pointing out and feeling good about these last names being out there as part of the mainstream fabric.  It is similar to how Robert Rodriguez does not identify himself as a Mexican-American yet his last name has been key to driving the younger Latino generation in feeling a proud connection as an American and not just “dash” American.

There are three films from Chilean filmmakers.  In unprecedented fashion – because that’s how Sundance likes to roll- there is a repeat of last year with two in competition, EL FUTURO by Alicia Scherson (mostly taking place in Italy) and CRYSTAL FAIRY by Sebastian Silva, an alumnus who broke out in 2009 with LA NANA. In the section Spotlight aka “Movies we love and don’t care if they’ve traveled the festival circuit”, is Pablo Larrain’s NO starring Gael Garcia Bernal.  Chilean cinema is hot and king of engrossing character-driven fare.  What we are seeing is a boom on two fronts; an invigorating new generation of provocateurs (Marialy Rivas’s Young & Wild comes to mind) and a slightly older generation of equally exciting filmmakers who continue to sustain their careers with their distinct voice (like Pablo Larrain along with Andres Wood).

So now lets dive in and look at the list.  Loglines copied from official press release – BOLD ITALICS are my comments.

Puerto-Rican Diaz delivers a fiercely moving performance embodying the girlfriend of Oscar Grant who was with him that fateful day.   Diaz is no stranger to the festival. She’s previously been at the festival with four films including seminal indie American Latino story, RAISING VICTOR VARGAS 2002 and comedies like HAMLET 2 20008.  Why homegirl hasn’t gotten more props for her mad acting skills I don’t know, but this girl is wildly talented and Fruitvale showcases her dramatic chops.

Narco Cultura / U.S.A. (Director: Shaul Schwarz) — An examination of Mexican drug cartels’ influence in pop culture on both sides of the border as experienced by an LA narcocorrido singer dreaming of stardom and a Juarez crime scene investigator on the front line of Mexico’s Drug War.

Absolutely arresting photography that works in giving weight to the violent images the public has become numb from seeing.  I predict some of my hard core brown and proud friends might focus and hence diminish this film based on the fact that this bi-cultural, Mexican-American subject is made by non-Latino filmmakers. It could be argued as a valid point.  When it comes to documentaries a legit question to make when evaluating is “What makes THIS person the right one to tackle THIS subject?   What is their connection?”  Let’s watch it to find out, then give consideration to what other docs are currently out there on this same timely topic made by Latinos, and without bias regard their depth and artistic merit.

This marks Sebastian’s third appearance at the festival following LA NANA and GATOS VIEJOS. Remember what I said about character driven?  Silva excels at getting at spilling out the insides of his protagonists.

Scherson’s last film, TURISTAS screened at various film festivals including the Los Angeles Film Festival in 2009.  Shot in another country and in a different language, The Future continues the filmmaker’s incisive capturing of the strong female led journey.

Who is Dayani Cristal? / United Kingdom (Director: Marc Silver) — An anonymous body in the Arizona desert sparks the beginning of a real-life human drama. The search for its identity leads us across a continent to seek out the people left behind and the meaning of a mysterious tattoo. World Premiere. DAY ONE FILM

An extraordinary cinematic and symbolic approach to the border crossing genre, this meta reflexive journey retraced by none other than Gael Garcia Bernal imagines the grueling experience of a migrant and who he might have been.  Bernal has been lending his star power to the social justice causes that move him and you can tell its genuine.

Halley / Mexico (Director: Sebastian Hofmann, Screenwriters: Sebastian Hofmann, Julio Chavezmontes) — Alberto is dead and can no longer hide it. Before surrendering to his living death, he forms an unusual friendship with Luly, the manager of the 24-hour gym where he works as a night guard. Cast: Alberto Trujillo, Lourdes Trueba, Hugo Albores

As unsettling it is watch, it is as deep to ponder, this incredibly-shot first feature had its world premiere at the Morelia Film Festival and its inclusion in the most daring section of the festival speaks to the highly diverse and radical new cinema coming from Mexico.

There have been many films about the Pinochet regime and its wide-reaching after effects.  But none have had as unique an entry point as NO. Trust.

Okay, I only include this because this is based on the Mexican cult hit, Somos Lo que Hay by Jorge Michel Grau.  Jim Mickle of Stakeland has promised to “Not Fuck it Up” per Twitch interview

To cap off the features;  Stalwart Spanish actor Alfred Molina is in Emanuel and the Truth About Fishes by Francesca Gregorini in US Dramatic Competition, and we have a strong acting splash by Marcus DeAnda, a co-lead in PIT STOP directed by Yen Tan and co-written by David Lowery.  The film about two gay working class lovers in small town Texas is in the Next section.

And lets not forget about shorts!

Broken Night / U.S.A. (Director and screenwriter: Guillermo Arriaga) — A young woman and her four-year-old daughter drive across desolated hills. Everything looks fine and they seem to enjoy the ride, until an accident sends them into the nightmare of darkness.

Ever since writing and directing team Arriga and Innaritu broke up (Amores Perros, Babel) Arriaga has been trying to make his stamp directing his own material.

The Companion / Peru (Director and screenwriter: Alvaro Delgado-Aparicio) — On the outskirts of Lima, a young prostitute tends to his father, a fallen-from-grace artisan. However, the young man feels that his efforts are never enough. He tries to break free, but his father’s dependence is stronger than his son’s will.

Paraíso / U.S.A. (Director: Nadav Kurtz) — Three immigrant window cleaners risk their lives every day rappelling down some of Chicago’s tallest skyscrapers. Paraíso reveals the danger of their job and what they see on the way down

Chicago? Check.  Mexicans check!  No, but really this intimate glimpse is poetic and moving.

A Story for the Modlins / Spain (Director: Sergio Oksman, Screenwriter: Sergio Oksman) —The tale of Elmer Modlin, who, after appearing in Rosemary’s Baby, fled with his family to a far-off country and shut himself away in a dark apartment for 30 years. 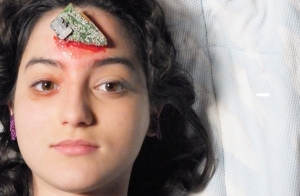 #PostModem / U.S.A. (Directors and screenwriters: Jillian Mayer, Lucas Leyva) — A comedic, satirical, sci-fi pop musical based on the theories of Ray Kurzweil and other futurists, #PostModem is the story of two Miami girls and how they deal with technological singularity, as told through a series of cinematic tweets.

My favorite locos from Miami.  After making the rounds with Life & Freaky Times of Uncle Luke, which played last year, these rump-shakers have been busy with their work in and out of their funky audiovisual collective Borscht Corp.

See you on the mountain!