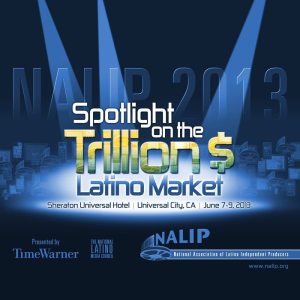 The National Association of Latino Independent Producers (NALIP) is ramping up for its 14th Annual Conference this weekend and to my great gusto, the discourse promises to be more specific, relevant and fresh than last year on how to empower Latino independent storytellers. Judging by the practical and forward-thinking panel discussions, NALIP’s Official Selection YouTube channel showcasing a curated selection of current film trailers, and the hip, savvy talent invited to represent, NALIP is setting the tone for discovery and healthy debate.  Chief among the themes will be a contextualized creative response to the much-propagated Latino trillion dollar purchasing power statistic, and how to strategically seize territorial claim to the wild wild west expansion of online distribution platforms.

Among the established and rising American Latino actors and filmmakers on tap are Richard Montoya, Cristina Ibarra, Aurora Guerrero, Gina Rodriguez, Danny Trejo, Jeremy Ray Valdez, and Jesse Garcia.  The keynote speech on Friday will be given by none other than Richard Peña, one of the most influential film curators in the world who headed the prestigious Film Society of Lincoln Center for twenty-five years.  It will be an insightful and thoughtful conversation moderated by the sensitive, masterly formal documentarian and MacArthur Genius Grant fellow, Natalia Almada.  As this year’s NALIP Conference Co-Chair, Almada helped inform the direction of the conference and scored Peña’s participation.  When talking about how each year’s conference organically takes shape with the feedback of board members, staff and hosting committee, Beni Matias, Acting Executive Director of NALIP, referenced Natalia’s concern of prominently featuring the voice of the independent filmmaker over the commercial as a guiding pursuit.

Natalia’s involvement with NALIP goes back to 2003 when she became the recipient of the Estela Award, given in recognition to an emerging filmmaker who has ‘arrived’. Her revelatory documentaries include El Velador, El General and Al Otro Lado – all which have been critically acclaimed worldwide and have been featured in museums and screened at film festivals including Sundance and Director’s Fortnight at the Cannes Film Festival. I asked her to share a few words about NALIP’s import and she replied over email, “I think that more than anything else the conference is a place where we can really exchange ideas, address shared concerns in our community and collectively fuel to keep going”.

Natalia is part of the sub-cine filmmaking crew who came of age through NALIP like Cristina Ibarra, Alex Rivera and Bernardo Ruiz. In fourteen years the organization has managed to be one of the few consistent Latino forums which has nurtured a family of artists/active organizers.  Along with Beni Mathias, Maria Agui Carter who is a filmmaker and the Chair of the Board of Directors, has been actively with NALIP since the beginning.  Other members who have continued to be involved with the organization since the beginning include Louis Perego Moreno who use to spearhead chapter leadership meetings, Jimmy Mendiola filmmaker and Director of CineFestival in San Antonio, Frank Gonzalez from Disney/ABC, Kim Meyers and Terri Lopez at WGA, Alex Nogales, to name just a few. NALIP has also enjoyed a sustained relationship with Time Warner and HBO who have taken turns at being the presenting partners of the conference since 2000.

Part of the reason I’m so eager to engage with and synthesize this year’s theme is this following text written by Maria Agui Carter to describe the Opening Plenary:

“Forbes magazine has called the Latino Market the “New Media Jackpot.” What is at stake? Why is every network and cable outlet now chasing the Latino market and how are Latino voices participating in this explosion not just as consumers but as creators?

There it is:  “But as creators”.  Amid all the hoopla over the rising Latino market data that makes corporate brands salivate over how to exploit us as consumers, I have yet to hear any of us fashion a reckoning of a counter creative force.  We should be imagining how to harness, demand and unleash our creative power with that kind of purchasing power.  Instead, the data is being used to make us a target of a non-stop branding attack in which the depletion of our capital power and identity is at stake.

Aimed to provide a more significant showcase for Latino filmmakers, NALIP is spotlighting recent films on their NALIP YouTube channel.  They’ve done away with the NALIPsters On View programming where members could openly screen their work during the conference.  Those screening rooms tended to be lightly attended since there was little visibility and competition from the panel programming. Instead, this year NALIP will be uploading trailers of current and upcoming films starting Thursday, June 6.  The plan is to build buzz and promote the curated selection of 15 documentaries, narrative features and shorts.

Without a doubt, the most anticipated happening of this year’s conference will be the NALIP and Sundance Institute screening of Richard Montoya’s debut feature film, Water & Power at the AMC CityWalk.  The impact and influence of this Chicano icon will be evident by the droves of fans, familia and homies, a wide range of community activists, artists and politicians who will be in attendance – La raza who reflect the young and old blood of the characters he writes.  I listed W&P as number one in my top five movies to watch out for in 2013 so I’m thrilled to see it screen this way.  Richard Peña will moderate a Q&A with Montoya after the screening.  I couldn’t think of a better filmmaker and moderator pairing.

On Saturday at the Awards Gala, Machete Kills star Danny Trejo, the menacing but actually sweet hood actor will be presented with a Lifetime Achievement Award.  Aurora Guerrero, filmmaker of Mosquita y Mari will be honored with the Estela Award that comes with a $7500 grant from McDonalds.   And in what will surely be an emotionally inspiring moment, the first ever La Lupe Award will be bestowed to Gina Rodriguez.  Her effervescence completely evokes the spitfire tenacity of the late great Lupe Ontiveros.  I couldn’t think of a more perfect homage and passing of the torch.

While I found last year’s panel topics all over the place, this year it feels more targeted and practical.  Panels like Beyond The Latino Market: Getting Your Film Out To A Wider Audience with Gabriel Reyes, Writing on American Latino films moderated by Carlos Gutierrez of Cinema Tropical, the leading cross platform company promoting Latin and Latino Cinema (and yours truly will be participating!), Whatever It Takes: DIY Technology and the Democratization of Content Creation, Major writing programs and initiatives at networks and studios for writers.

On Sunday the Closing Plenary will be Latinos and Media Stereotypes in which Natalia Almada, Richard Montoya, Maria Agui Carter, Yancey Arias will participate and moderated by Mandalit del Barco of NPR.  These are all highly experienced, opinionated individuals with distinct tastes and critical contribution to content so I expect this to be one of the more livelier talks.

Overall, this year’s NALIP conference is about to go off!

For a full list of speakers and panels here available at http://conference2013.nalip.org/conference/keynotes-speakers/